The Art Of Ridden Communication....

Did you know that the weight of a typical black fly is around 12mg? A horse can feel 12mg dancing on their skin and yet humans who weigh several thousand times more than this still communicate by pulling and kicking. If a 12mg fly can create movement from a horse, shouldn't we as intelligent, compassionate beings be able to find a way to create a partnership without aversion and force?

Why Shout when a Whisper Will Do? 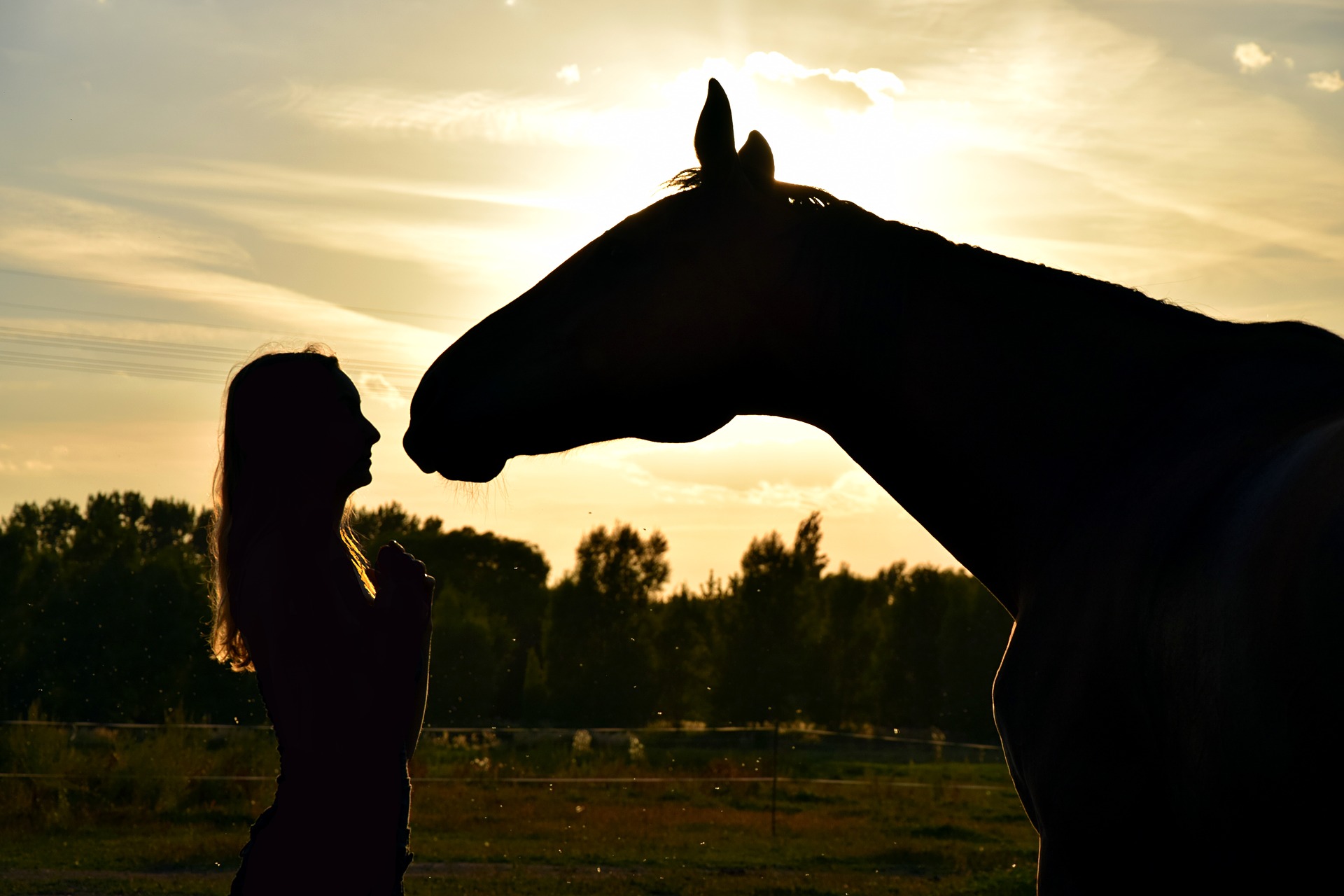 The natural riding aids are the seat, legs, hands and voice. Rather than using aids like an on-off switch, with minimal sensitivity and adjustment, it is preferable to think of using them like a dial, with varying amounts of pressure. The extent to which each aid is used is dynamic and dependant on the individual horse and the situation.

Consider this a bit like driving a car, where the accelerator is used to a varying degree depending on numerous factors such as the engine type, road conditions, the weather, volume of traffic, speed required, etc. The driver is continually considering these factors and feeling what the car is doing, so the accelerator is not just used on or off but rather with varying degrees of pressure from the foot dependant on the circumstances and the required result.

Think of your aids like a dial, not an on-off switch 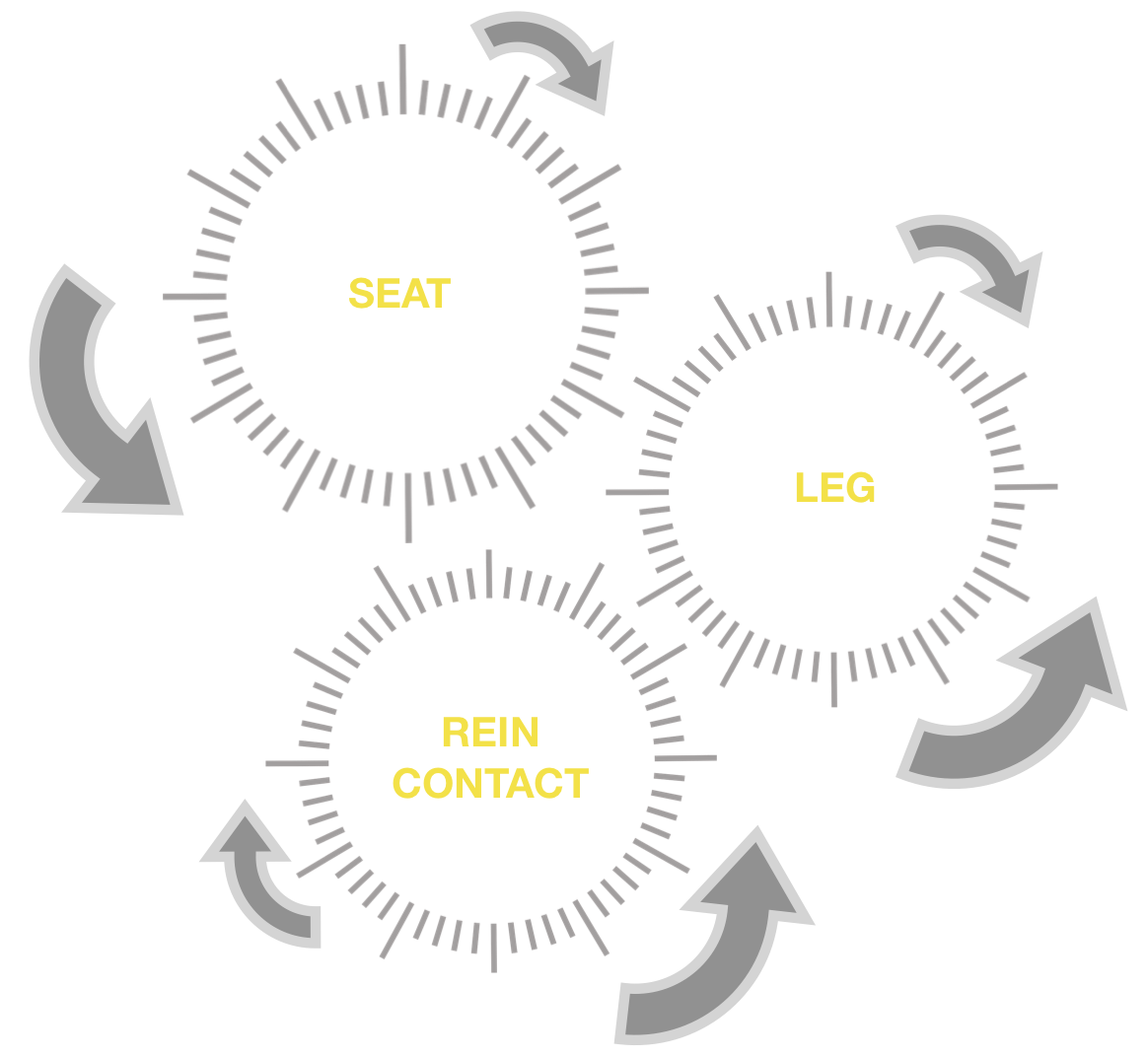 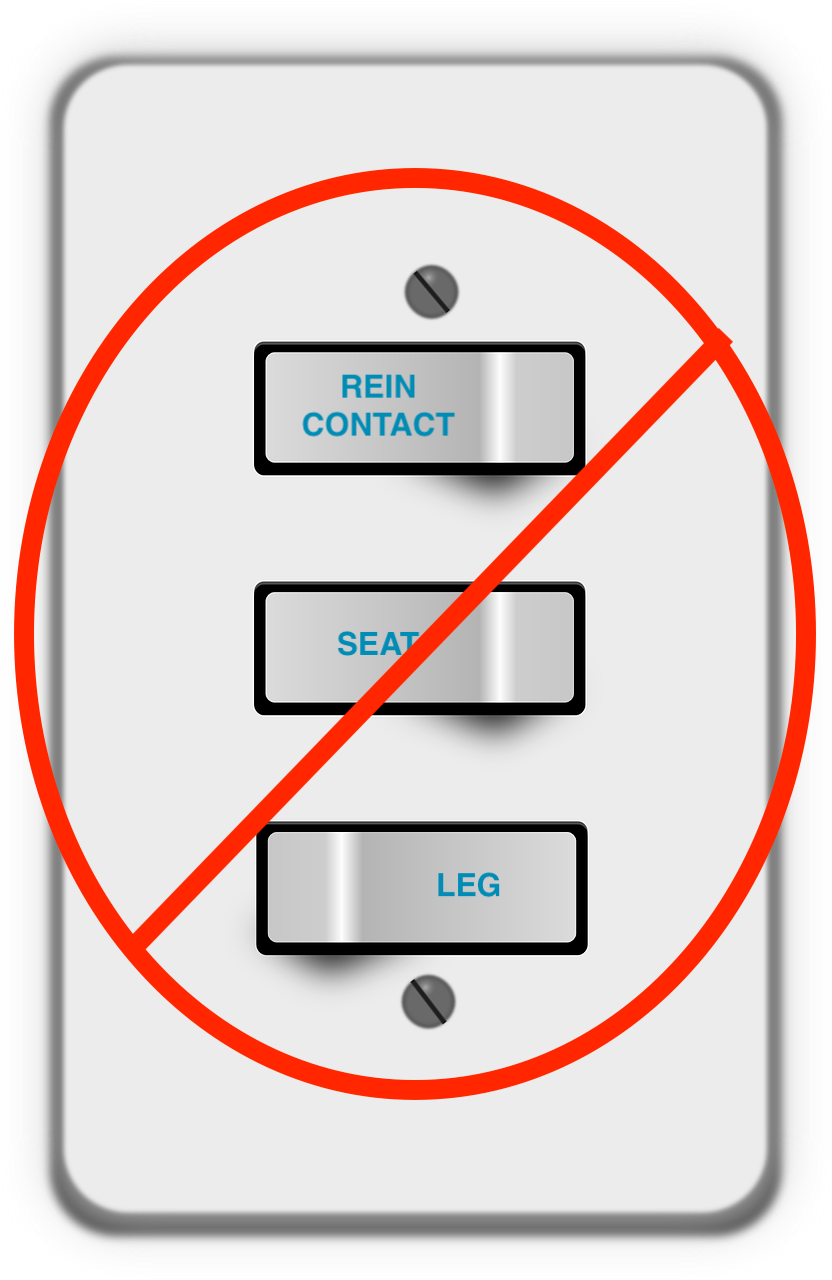 So when riding, consider using each aid in a manner appropriate to the situation and be prepared to vary its use as the situation changes (or not!). The aids are inter-linked and so you will often have to use more than one aid at any one time but not necessarily to the same extent.

It is important to use aids subtly, i.e. just turn the dial slightly. Again, using the car as an example, it is rare that you need to put your foot flat to the floor on the accelerator.  When riding, turning the dial up to the maximum levels on a regular basis is not only inappropriate but it can also cause the horse to become numb to the aid. In order to get a response the rider then has to turn the dial even more, however eventually there is only so far the dial can be turned before the rider cannot go any further. In practical terms this can be explained by using the leg aids as an example-

A fly can create movement from a horse, do humans really need to use so much pressure?

Why shout when a whisper will do? 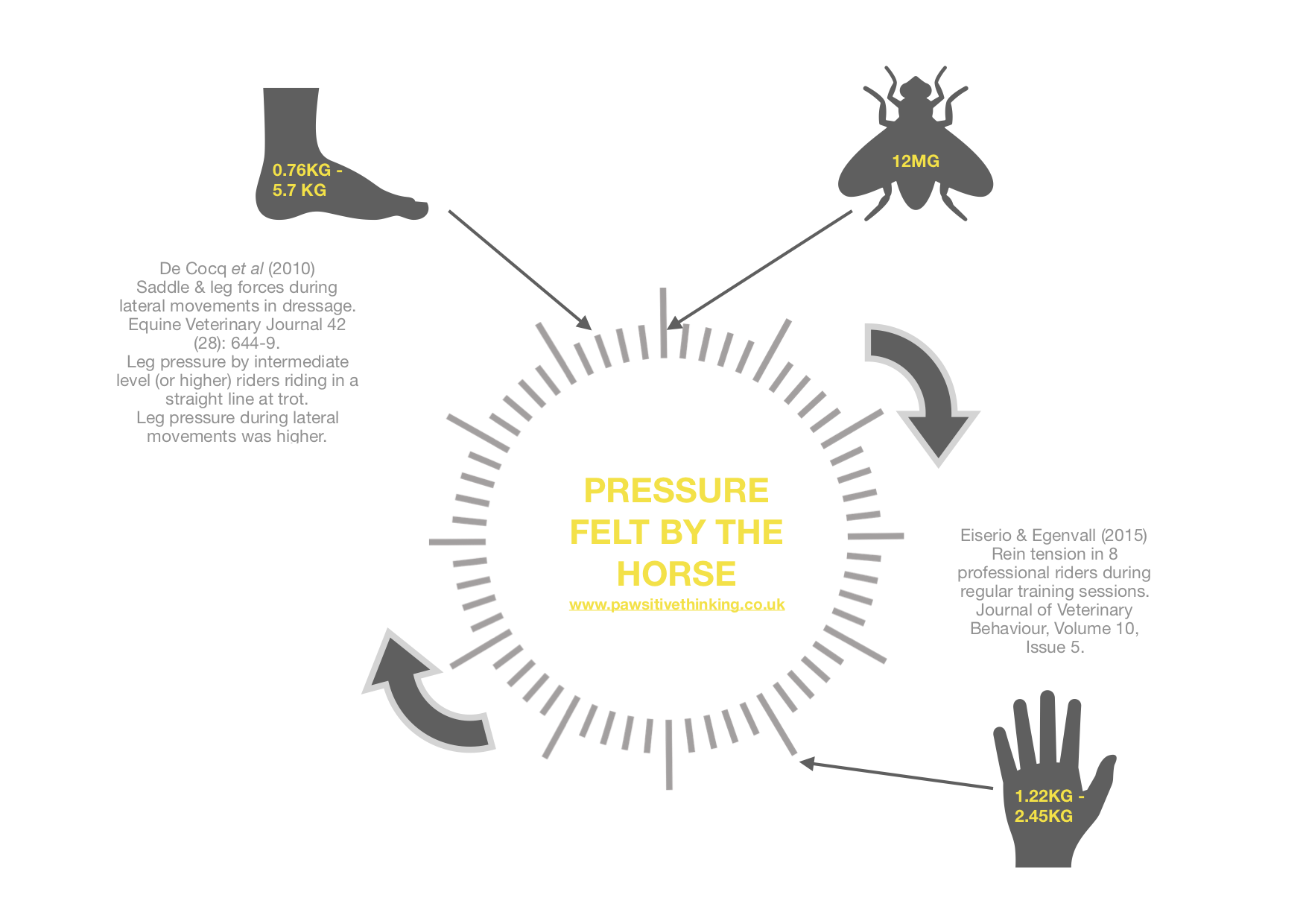 It is important to consider the communication from the horse when selecting the aid to use and the extent to which you will use it. Firstly, the horse must be physically and mentally capable of doing what you are asking it to do. If it isn’t, and the rider hasn’t listened, then it is a common mistake to then increase the pressure.

Then consider the response that you get from an aid. Has the horse responded correctly? Responded incorrectly? Not responded at all? Then ask yourself WHY have you got this response? It is common for the rider to think that the horse hasn’t listened or has chosen to ignore or disobey the rider.  Instead, the first thought should be- Has the rider asked correctly and clearly so the horse understands? Have any mixed signals been given by the rider? Have the aids been given at an appropriate time? Sometimes this can be hard to ascertain, particularly without help on the ground.

If a rider is repeatedly feeling that the horse is not accomplishing what they are being asked to do then step back and consider why this may be. For example, if a rider is kicking repeatedly to ask a horse to move, yet the horse doesn’t increase its pace, is this because the horse is ignoring the rider? The answer may be yes, but not because it is a conscious thought from the horse but rather that the horse has become numb to being kicked, so the horse switches off from that cue.  Or it may be because the rider continues kicking even when the horse has increased its pace (however slight), so the horse is confused as to what the kick is a cue for. The horse therefore doesn’t respond in the way that the rider intends because it doesn’t know what the aid actually means.

Try to use as subtle an aid as possible.

Remember, each aid itself can be used at differing amounts of pressure, they each have their own dial. Once the dial has been turned up high on a regular basis, it is hard to turn it back down again. Sometimes the dial cannot ever be turned down. For example, if a rider always pulls the reins to stop, then gradually the rider will have to pull harder and harder to get the same response. From there the horse may need a different bit and/or a different noseband to get a response and the pressure continues to escalate. This is not because the horse is consciously choosing to ignore the rider but because their mouth has become hardened to the pressure, so the rider has to find ways of increasing it. This damage can be irreparable. Teaching the rider not to pull and the horse to slow down from a more subtle aid takes much longer than just pulling the reins, so it is easy to see why pulling becomes normality. However, a quick result from a strong aid should be saved for emergencies and not to replace hours of practice!

Following the LIMA strategy is a hugely positive step. Choosing to use the least intrusive, minimally aversive methods available and allowing the horse fair choice within a situation helps to-

This in turn greatly increases the safety of riders due to the advantageous effects on the horses's physical and mental health.

To summarise, riding should be about building a harmonious partnership between horse and rider. This takes time, patience and practice, just like learning any other skill properly; but it could be argued riding is harder because there are two brains and bodies, not one!

By having the ability to communicate with the horse in numerous ways, rather than in an ‘all or nothing’ fashion, the rider will be more skilled at getting the best from a horse and have a safer, more enjoyable ride. The horse’s welfare will also be dramatically improved. If a rider just says what they want to do and does not allow or listen to feedback from what they are sitting on, then they should stick to riding a bike!

Natalie Bucklar, BSc (Hons), MSc is the owner of Pawsitive Thinking. We supply products to help with the training, care and enrichment of your pets.

The Perils Of Puffed Dog Chews